Until comparatively recently, each village in the Indian Himalaya, irrespective of its geographic location or its religion, formed a small community with its own identity, its own dialect, customs, local deities, jewelry and clothing. The larger labels of Islam, Hinduism and Buddhism were less relevant than the history and customs of the village itself. Just as each valley had its own climate, its own weather patterns and winds and terrain and plants, so too each village, a self-contained world unto itself, had its unique characteristics.

Connecting these isolated and remote villages was a vast network of traditional trails. For whatever reason, be it trade or religion or family, the villagers thought nothing of spending days or weeks walking through deep valleys, climbing innumerable mountain slopes and crossing dangerous rivers and passes. No doubt over the course of the centuries, many of them perished on the way. The blunt reality was: there was no other way of getting around, no other way of reaching and communicating with others.

The trail went where it could, seeking the traversable areas of the landscape. It exploited the possibilities. Its existence began when human beings, driven by sheer necessity and possessing a profound knowledge of the landscape, worked out where it was possible to walk and climb to reach a given point somewhere in mountains: a village, a town, a monastery, a sacred lake – the plains of Northern India or the inner regions of Tibet. The Himalayan trail represented the triumph of human beings over the fierce adversity of Nature. And finding the trail was a serious business: to lose the trail in that wild, merciless landscape was to confront the certainty of death. When human beings followed a Himalayan trail, they did so with prayers and mantras on their lips. They beseeched their gods to keep them safe, surrounded as they were by the sheer overwhelming power of the natural world. At the tops of the passes there were shrines – a trident spear, a prayer wall, an image of Shiva or Budda – where one stopped and paid one’s obeisance to the supernatural being beyond the cycle of life and death. 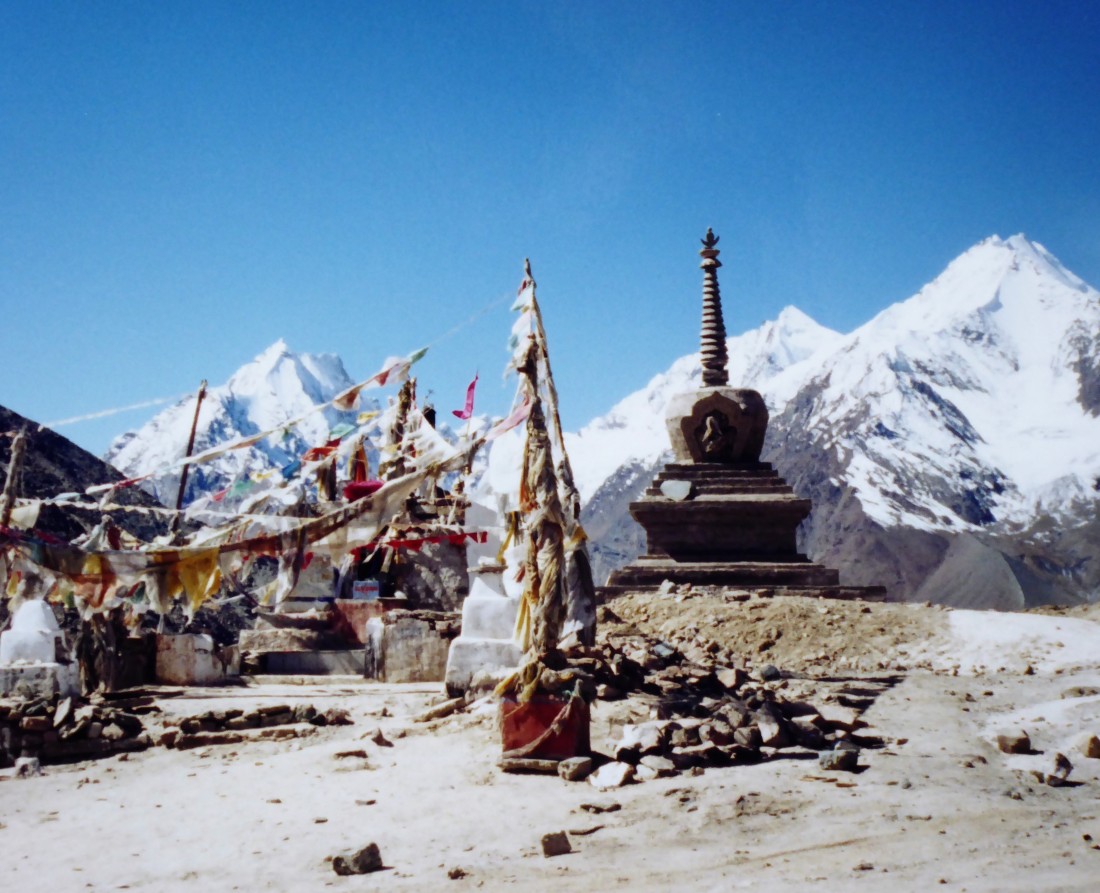 There were maps of these trails.

We bought 3 complete sets of maps covering the entire Indian Himalaya; Indian, Swiss and British. Each set of maps was different and often indicated different trails. None of them was in any way comprehensive – let alone consistently accurate. From our three sets of maps, we got a good idea of all of the major trails, where they started, where they went and where they ended up; how many rivers and passes they crossed and so on. But we also knew from experience that in between the trails indicated on the maps, there were other trails, minor trails used regularly but by less people – and which often went through tough but exciting terrain. 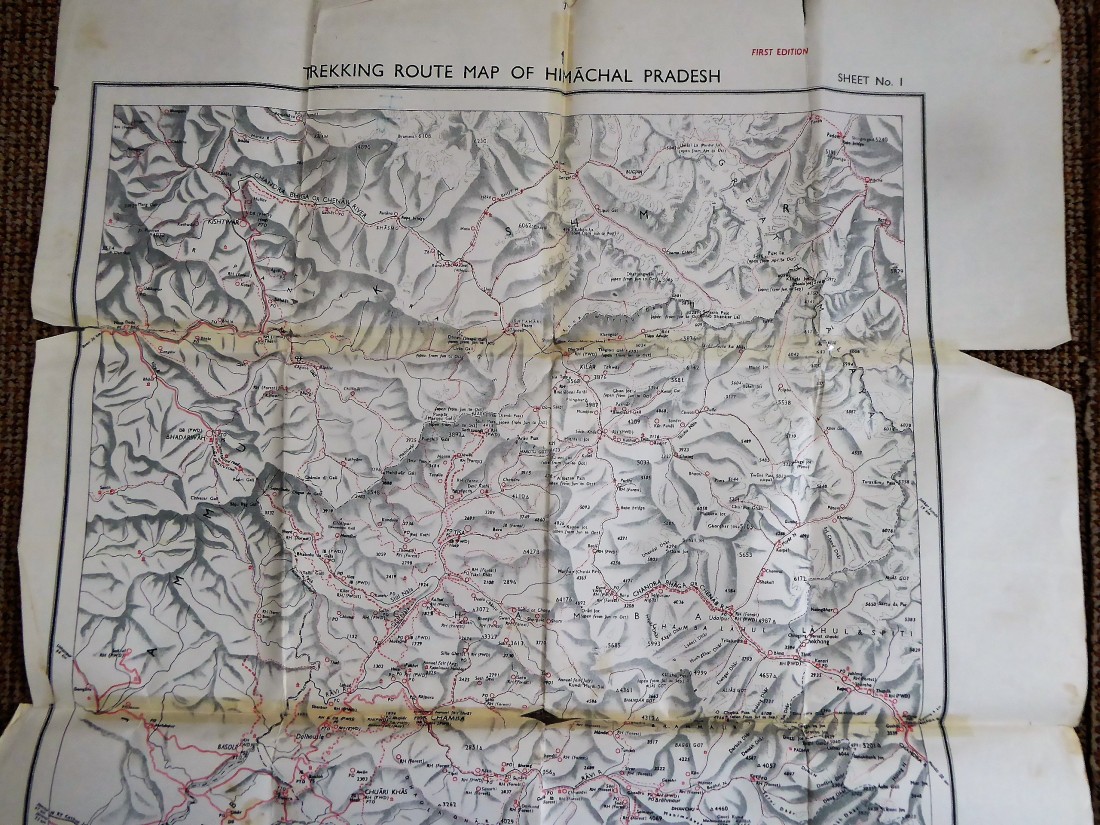 Along with mistakes, there were gaps in the information provided by the maps which could only be filled in by obtaining local information.  – from villagers, shepherds, traders, lamas, government bureaucrats and other trekkers, for example.

Between ’1987 and the mid ‘90’s, we went trekking in the Indian Himalaya almost every year, each time for about 3 months. We followed old trails we knew well and new ones we hadn’t tried. There was always this relentless ambition to go somewhere where we hadn’t been before.

The years passed and the traditional trails which we followed into the Tibetan Buddhist Himalaya merged into one long trail, an epic attempt to find a way through a natural abyss, all the time fearing being lost and yet hoping too, that there would always be a place to get lost in. A long journey together, one which took us into a stark, utterly uncompromising world of rock and ice, high cliffs and plunging ravines, fast flowing rivers and arid deserts; of what was then some of the most remote, wild, and undeveloped terrain in the world.

There were times when we trekked into far-flung regions for weeks on end and saw no one. Living for days on end on very little food, with the threat of losing our way hanging above us, we were infused with a mixture of emotions as stark as the moonscape around us. In a physical world which was beautiful yet harsh, the survival instinct took over in a way which was relentless. Along with the adrenalin surge were intense feelings of wonder, excitement, strangeness and fear. Sometimes after a particularly harrowing experience – losing our way and almost starving, being stranded in a blizzard or almost drowning whilst trying to cross a river – we made a solemn resolution to renounce this kind of travelling and do something a bit safer, a bit wiser; something a bit easier on our bodies.

Yet invariably, after a few months back in Europe and back at our normal weight, we started thinking about our next trek. The maps came out again and we started planning another trip. Friends wondered whether we weren’t in the clutches of a masochistic impulse.

‘You’re not really going to tell us that you enjoy this?’ they asked.

It was much more than that.

Next blog, Trekking in the India Himalaya Part 1:

Tagged as: photo essay of trekking in the tibetan buddhist regions of the Indian Himalaya, serious travel images