It’s never existed and never will.

Perhaps in the dreams of opium addicts and the false promises of prophets, quacks and politicians.

On Ko Sukorn, human beings live. They have various ways of earning a living and every one of them involves hard work and  monotony. Their achievement is this simple: they do so with a sense of humour. They accept their lives with a certain degree of grace. They are not ambitious. They are not driven by a need to make money from tourism.

They grow their own vegetables and cultivate papaya and pineapple;  they fish, keep chickens, geese and cows; keep small stalls from where they sell items brought over from the mainland: e.g., cool drinks, spices, shampoo, facial cremes, clothing, sweets etc. Drive a rickshaw to pick up locals returning from the mainland or arriving tourists.

A major source of income is tapping rubber trees.

The south of Thailand is one of the world’s main sources of rubber. Massive plantations of rubber trees are a common sight. To tap these trees, small armies of rubber tappers are employed. The rubber plantations and the rubber industry, is in the hands of a small elite of super rich Thai Chinese. Amongst other things, this organisation wages a ongoing battle against NGO’s and other critics who focus attention on the harsh working conditions of the rubber tappers and their paltry wages.

On Ko Sukorn the situation is somewhat different. The trees are owned by the people who tap them. Almost everyone on the island owns at least a few dozen rubber trees. This is a small blessing. They are at least spared the grossest exploitation of the rubber industry: they gather the latex sap, process it into sheets, which are then sold on the mainland. They are not slaves working en masse for a Chinese boss. 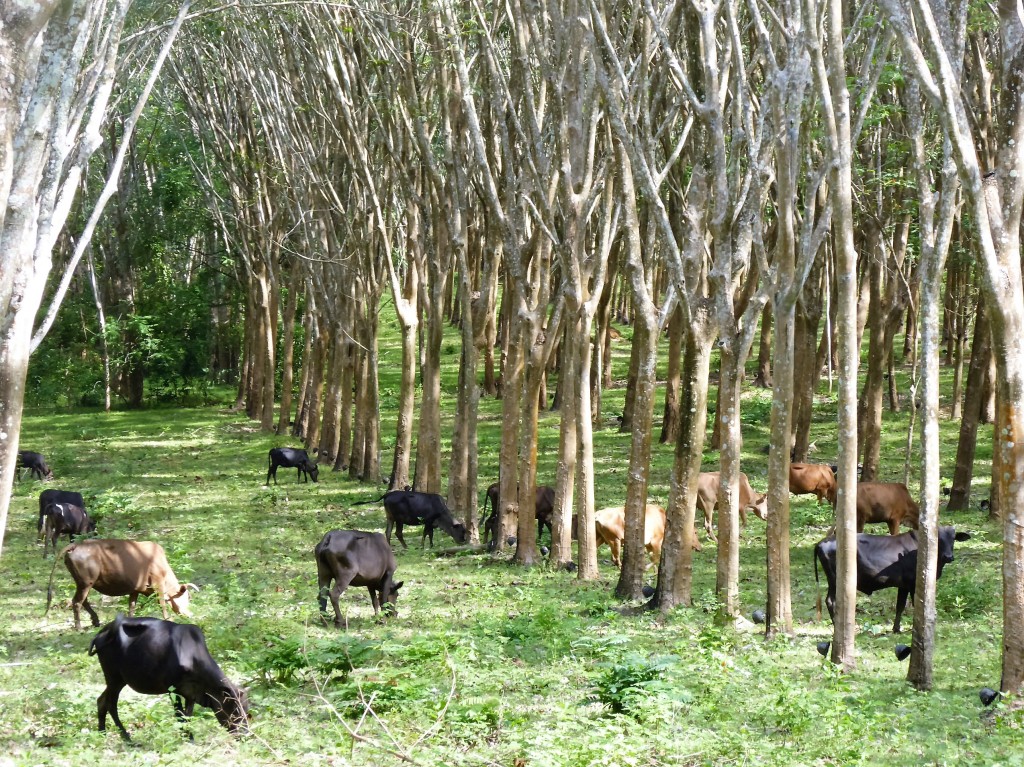 The grass between the rubber trees is kept down by grazing cows.

Rubber tapping is hard work. The trees are tapped – rather, milked – in the early hours of the morning, between 1 and 5 am. An incision is made near the base of the tree with a special knife and the sap, a milky white liquid, drips into a small bowl. The bowls are tipped into a bucket.

A dash of vinegar is added to the buckets of latex before it is poured into metal trays where it coagulates as the sun rises and the temperature rises. A soft putty like substances it is trodden underfoot to create a sheet, which is then continually run through a hand-operated press to create something resembling a large yellow chamois 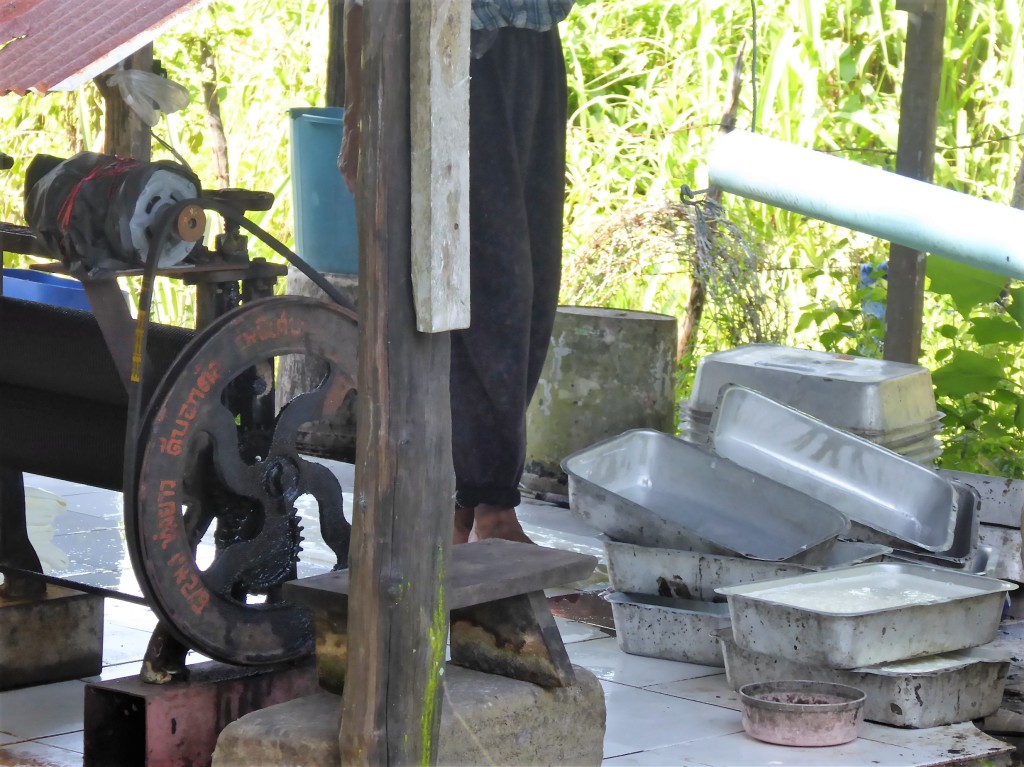 The sheets of latex are hung out to dry in the sun, like wet clothes. 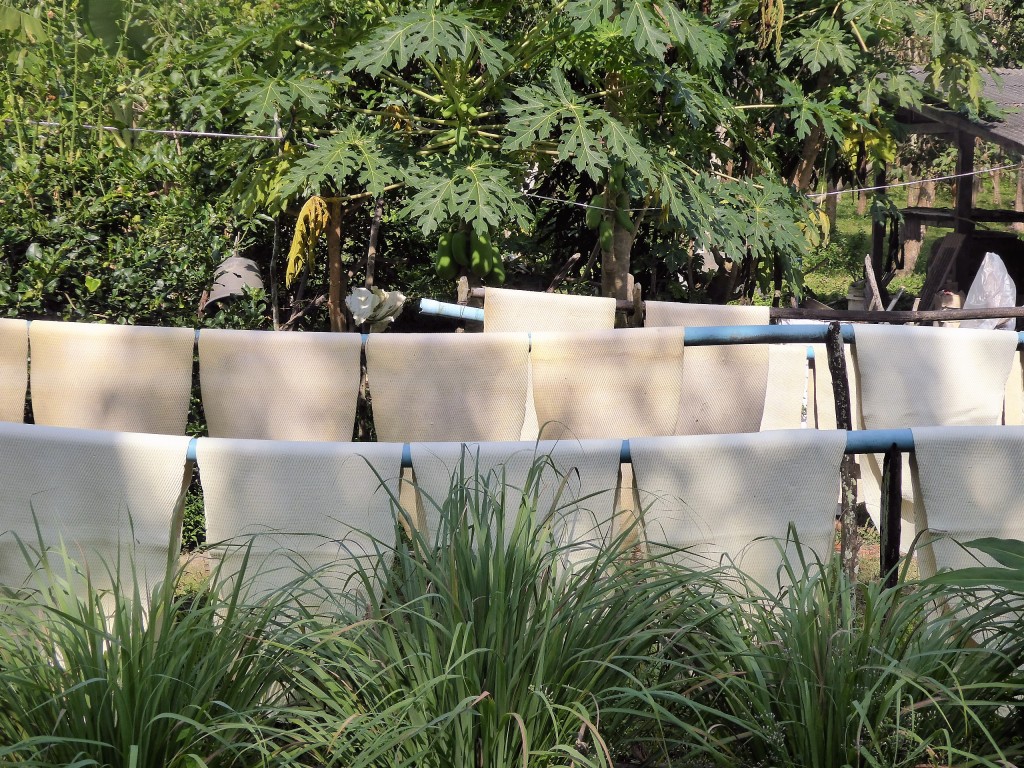 The dried latex sheets are bundled up and then taken by boat to the jetty on the mainland, where they are stacked into a utility vehicle and transported to one of the large corporate buyers. 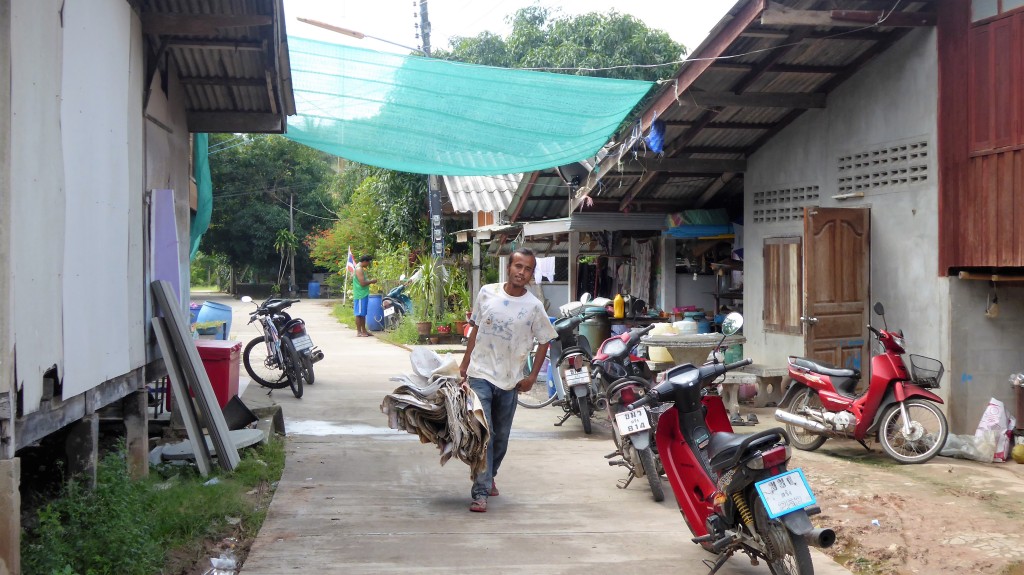 Most of the islanders do a bit of everything: grow vegetables and fruit, fish, raise animals, sell stuff at a market or shop, run a rickshaw, tap rubber trees. No one specialises in one thing. This creates social bonds which transcend religion or class. Everyone shares a similar set of life circumstances. How long this will continue is a moot point. The children attend primary school on the island but later, attend High School and further, on the mainland. Inevitably they are acquiring different expectations and ideas. Many of them come home during the weekends and holidays. But will they ever return to live like their parents and grandparents?

What will happen in the future? 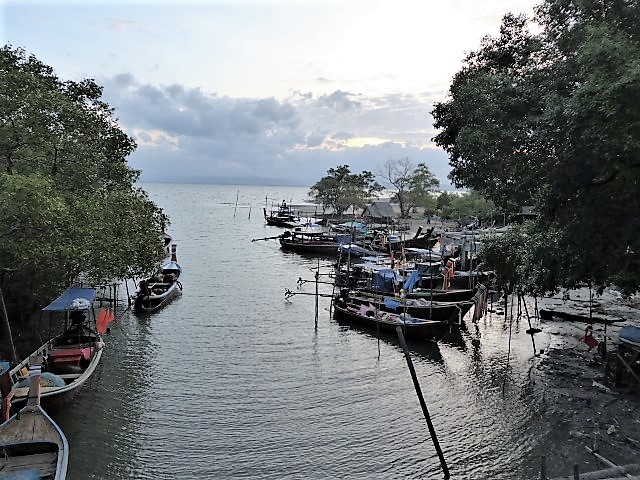