Riding The North Coast of Germany

Anya and I got our bikes into a special bike carriage on a German train leaving Amserfoort – near the Dutch border – for Berlin. Our plan was to get off at Osnabrook, get another train to Bremershaven on the coast of Northern Germany, and follow the North Sea route to Denmark.

For a while everything seemed to go to plan. Then just over the German border the train stopped and everyone – hundreds of tourists in other words – were forced to get out and walk to the other side of the station and get into a smaller, local train. It seems as if the air-conditioning in the train wasn’t working as it should have (though no one noticed anything). A new regulation stipulated that when this happened, the train had to be stopped to save energy and ‘protect the environment’. The regulation was applied strictly by the railway bureaucrats never mind the inconvenience it caused to the tourists on the train. There was chaos as hundreds of people were shunted in to local trains. Many people missed their connecting trains and lost their money on their first night accommodation in Berlin. There were frayed tempers and yelling. Getting our heavily laden bikes into a smaller train – along with all the other bike riders – was quite a drama.

Finally we got to Osnabruck, about 2 hours later than we’d  planned.

Whilst waiting for our connecting train to Bremerhaven, I took this photo of a woman on her phone – it caught my attention because it seemed like an apocryphal image of our times. The Dutch painter Vermeer portrayed scenes of women darning, pouring water out of a pitcher, writing a letter – and lost in thought. Today, he would paint us lost in our tablets and phones…..

The next day we left Bremerhaven and followed the North Sea Route along the coast until we came to Cuxhaven. It was late July, tourist season and there were thousands of Germans staying in Spain like hotels and going to the beach…

We stopped our bikes and went and had a look at the ‘beach’ – tidal mud flats which as we later discovered extend all the way along the coast of Germany up unto the Danish border. For the privilege of visiting these ‘beaches’, one must pay 3 Euros.

The next day we put our bikes on the ferry crossing the River Elbe; it doesn’t cross it directly but goes up the Elbe before arriving on the opposite bank – a journey of an hour and a half. 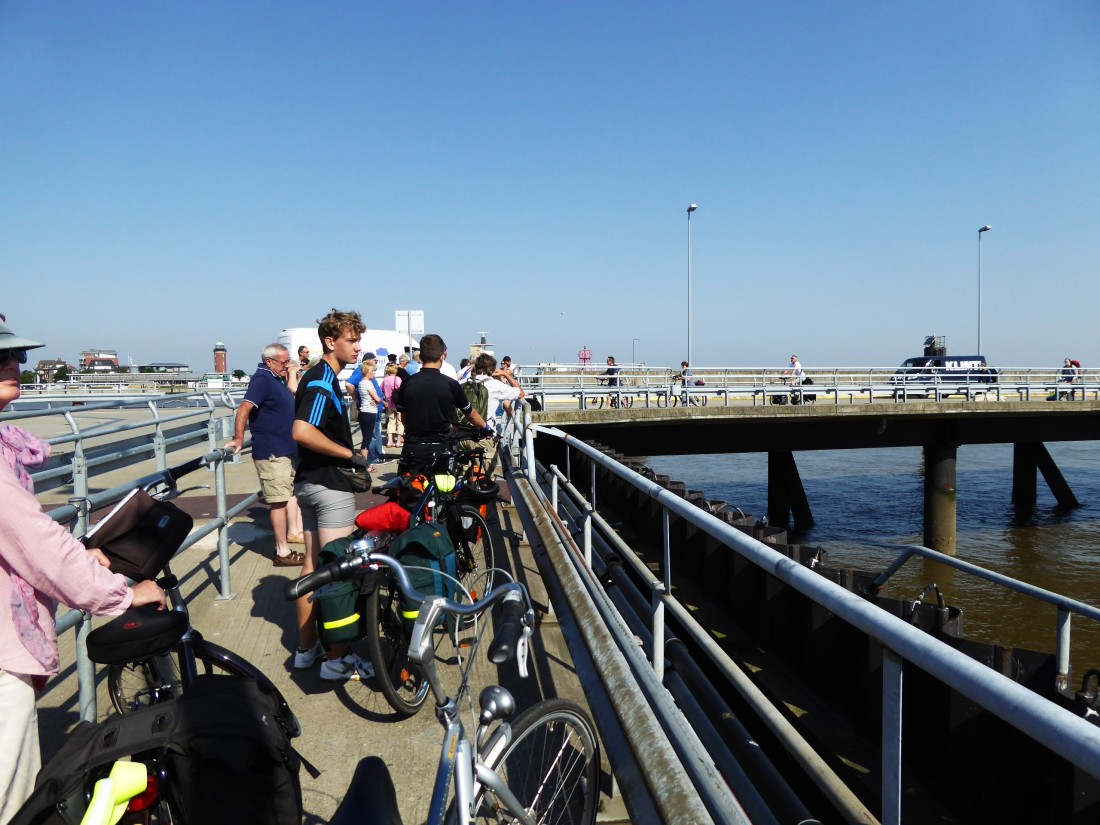 There was plenty of traffic on the Elbe…. 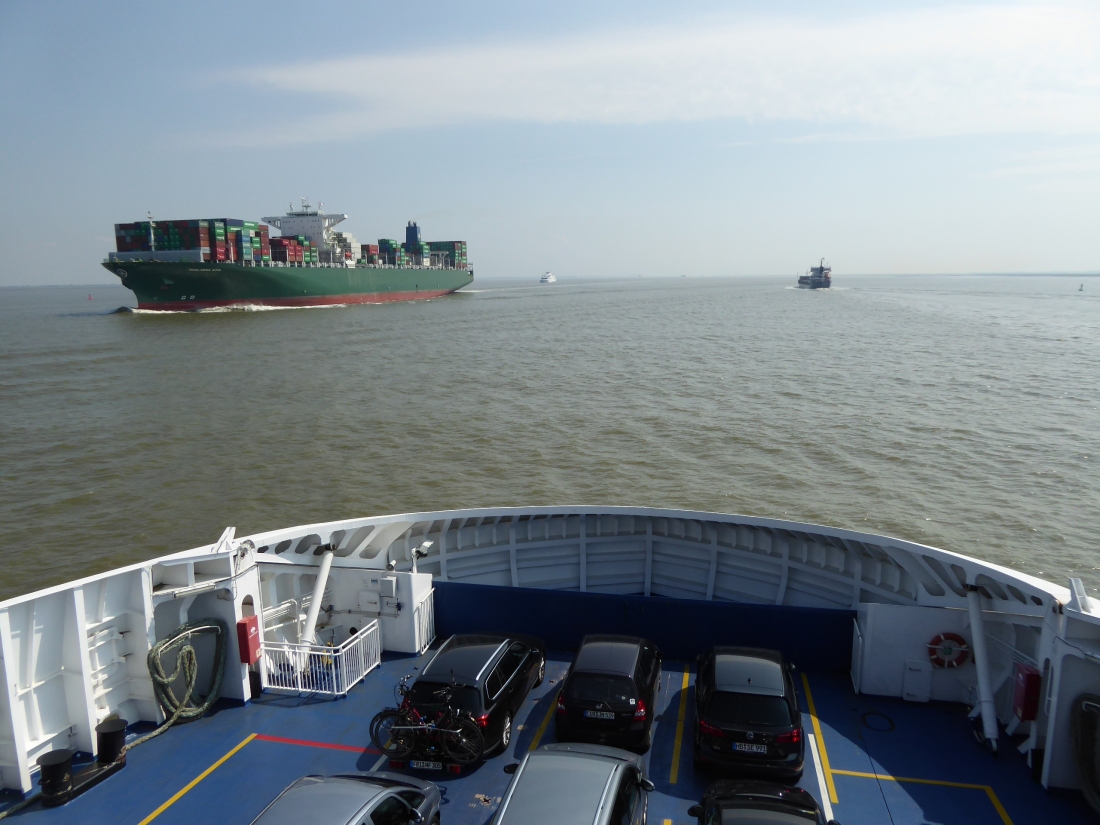 On the other side of the Elbe, we lost the North Sea Route – there weren’t any signs. It took us an hour or so to find it again. There was some fine riding through some classic historic old towns. 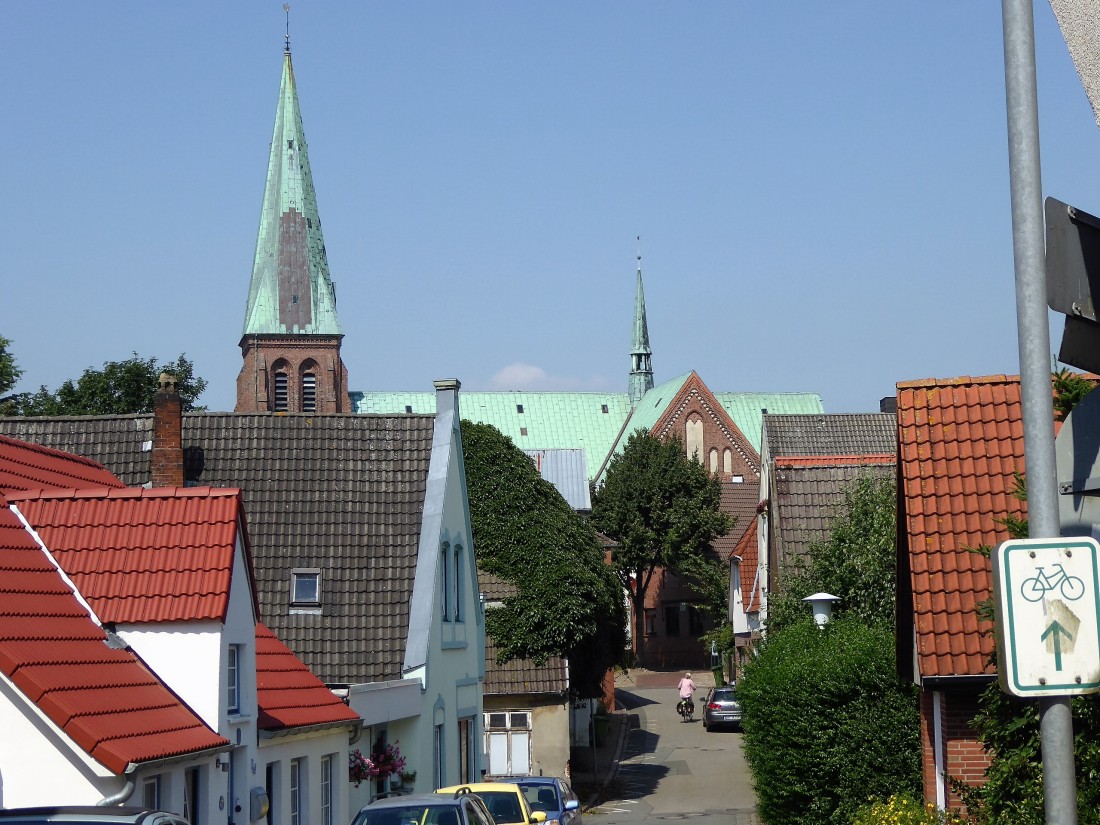 A couple of days later, still following the German coast…. 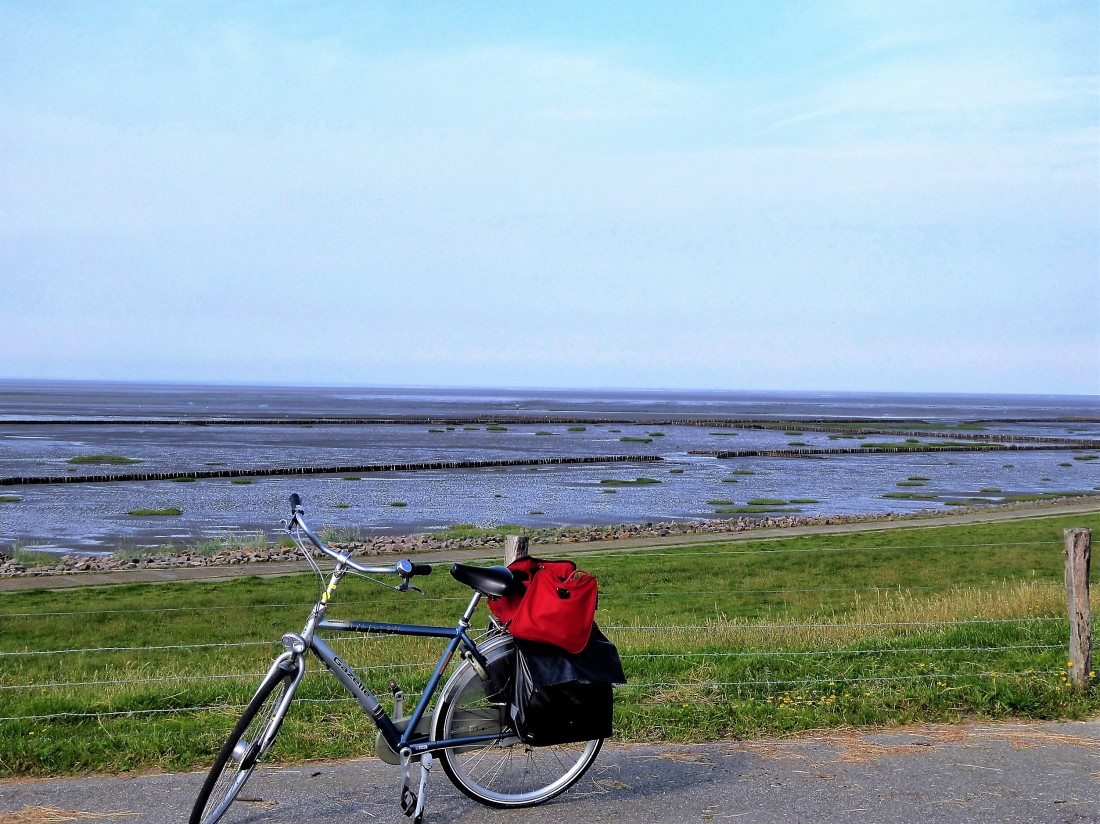 On our last night in Germany we stayed near the Danish border. The following morning I wrote in my diary:

“We’ve in Germany for 4 days. This morning, having breakfast at our hotel, it occurred to me that in 4 days’ time, the previous 4 days will have melted into history, memories, something detached from the present. Germany will soon become a series of images like yellowed photos in an album.

And one day Denmark and our time there will undergo the same relentless process.

Seen in this light, we are no more than passengers in time desperate to hang on to something on the way – and as futile as it is, to document the voyage with words and photos.

Our hotel is at the junction of several roads, two of which are quite busy. There are no towns or villages nearby. We are surrounded by fields of potatoes, corn and wheat. Next to the hotel is a sign post indicating various destinations including a place called ‘Tonder’ and next to it, in smaller letters ‘Denmark’.

Tonder: the next step in our history which is yet to happen.”