Those lines on maps. Well, usually they are lines – or something close to it.

Sometimes though, they are not lines at all: take the border between the southern Netherlands and neighbouring Germany for example. Nothing even remotely like a line here. It’s a series of twists and turns, of bays and peninsulas. Slithers of the Netherlands project out into Germany and vice versa.

It was something A. and I experienced during our bike ride from the east of the Netherlands into Germany. The idea was to follow the main bike trail along the Rhine river, but after a couple of days we began riding inland following minor trails – which led to us riding into a shadow land. One moment we were in Germany and the next, in The Netherlands. We never knew where we were (the border was never marked or sign posted) until we saw the language on the signs. For example: the memorial we came upon whilst riding along a Dutch bike track. We had been riding in The Netherlands for most of the day. Late in the afternoon, we saw a bench seat under a tree and pulled up and sat down. Then we saw a memorial a few meters away. We got up and went over there and had a look. There a brass plaque on the memorial and it was in German. 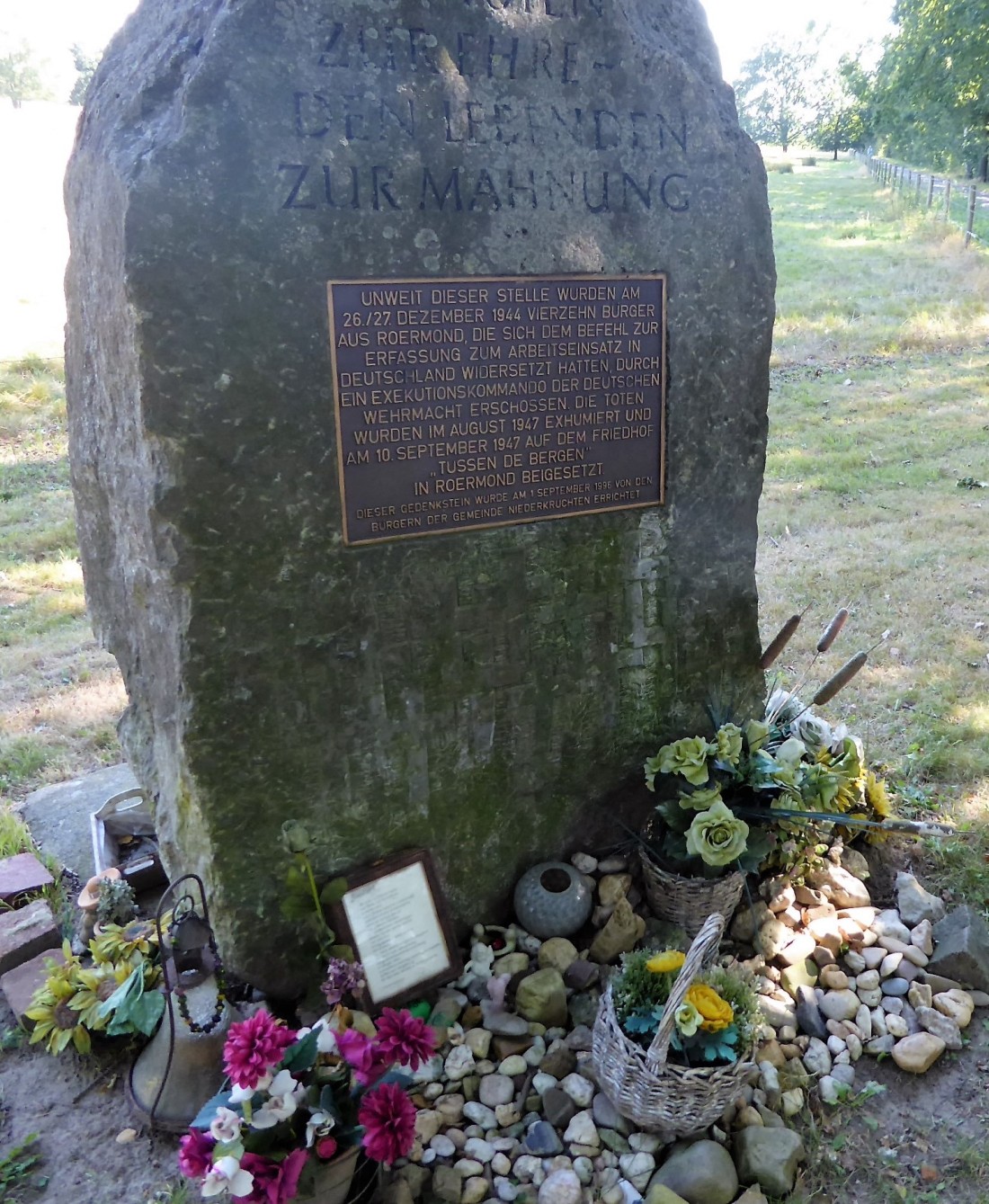 The bike path, running right next to the memorial, was in The Netherlands.

But the memorial – and the bench seat we were sitting on – was in Germany! 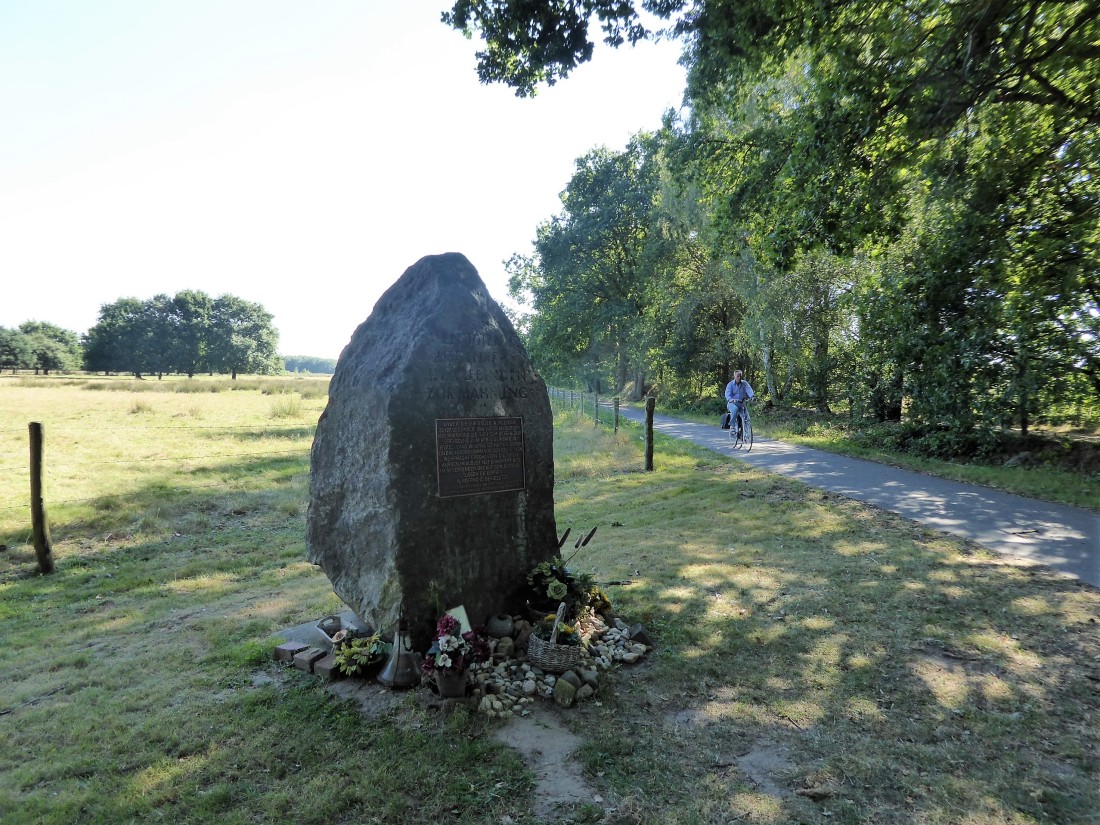 Why was the memorial there?

‘In December 1944, 14 Dutch citizens from Roermond were executed here by the German army for refusing to work in Germany. The bodies were exhumed in 1947 and buried in The Netherlands. This memorial was erected in 1996 by the German government.’

On the way to a B. and B. in a Dutch enclave, we stopped at a roadside shrine dedicated to Mary.

There was a big tree next to the shrine which offered precious shade on a warm afternoon – in an agricultural area otherwise devoid of trees.

Like in the adjacent regions of The Netherlands, the Germans in this area were traditionally Catholics. These days of course matters are rather different. Both countries are modern societies with a high standard of living and high education levels and religion has lost its hold. Most people are non-believers. You only have to see the size of the churches and the monasteries on either side of the border however ( which today are tourist attractions) – to realise how once, not so long ago, the Catholic church had immense power. The priest dropped around to visit young couples and ask when the next child was on the way. In the religious schools and monasteries, as we now know, child abuse was occurring and being systematically hushed up by the Vatican.

Sitting under the shade of a fine old tree, we were surprised how many people stopped at the shrine – on bike or by car – and offered prayers to Mary.

Each visitor lit a small candle before leaving the shrine.

At the entrance to the shrine were plaques attached to the walls, each one commissioned by a private person and offering thanks to Mary for the presumed blessings or even miracles she had bestowed. 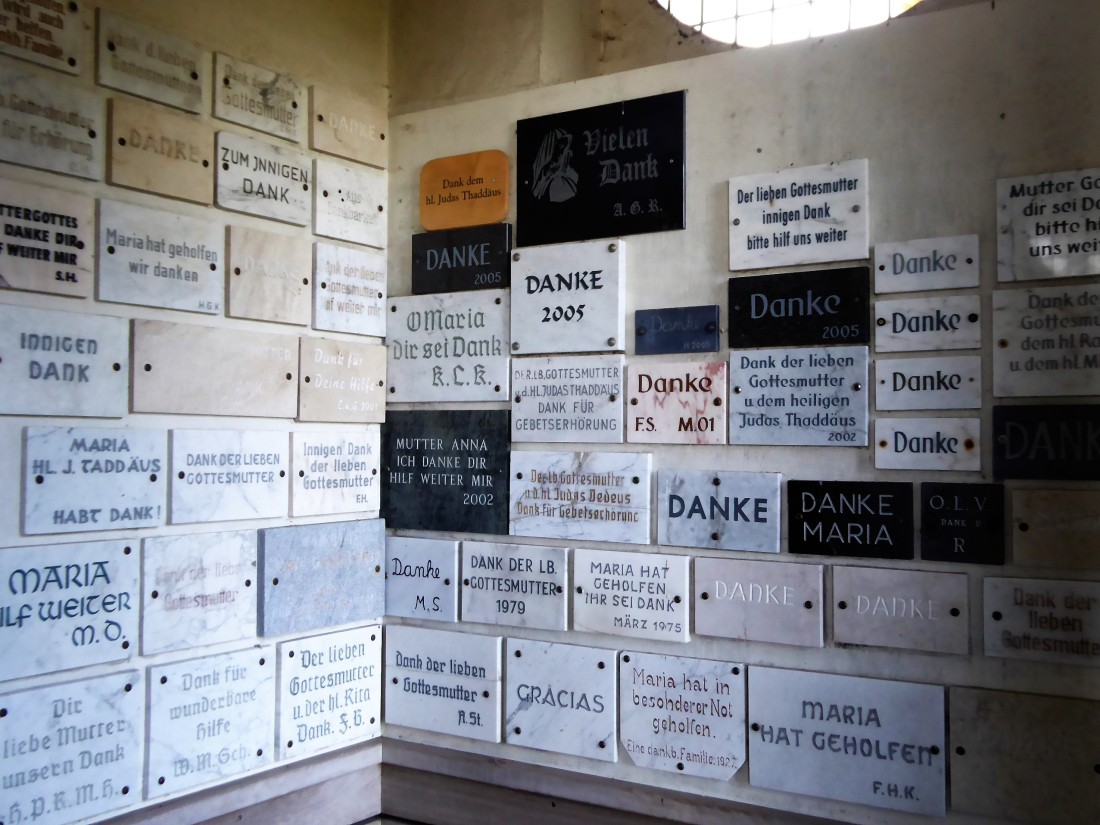 I rather liked the idea of a woman as a God. Should be more of them, along with female priests and imams. I was so damned sick of men and a male run world – though I guess that Jesus with his message of love, tolerance, and forgiveness espoused female qualities. Siting under my version of the Bodhi tree, it seemed to me that it was time we had a female/gay/bisexual/transvestite/ versions of Buddha, Allah and God. Only then was there any hope for us.

15 minutes after riding away from the shrine we were in The Netherlands. Once again the excellent bike paths marked with green numbers and blue signs. The B.and B. was in a suburban street and run by an elderly couple. She was Dutch and he was German. We asked them which language they spoke together and they said: dialect.

Something we had forgotten: until comparatively recently, everyone in these areas of Germany and The Netherlands spoke a dialect – which could not be understood by either Germans or Dutch. Dialect has almost disappeared in recent years – along with religious belief; it is a relic of bygone times when regional identities were more important that the nation state.

A Dutch fish vendor – where you can eat raw herrings!

A few days later, well and truly back in Germany, we were following a back road when we saw a sign for a Jewish graveyard.

We followed a narrow dirt track between wide fields of corn.

The survival of a Jewish graveyard surprised me.

My guess is that the Nazis focused their energies on destroying the large graveyards in the major cities – along with the synagogues. This small graveyard – 50 or 60 tombstones – in a out of the way place in a rural area had managed to escape the attention of the Nazis.

Many of the graves dated from the 19th century. Some of them were in German and others, in Hebrew script. Seeing the Hebrew, I was reminded of my trip to Israel and the unique history of scattered people who against ferocious odds had somehow managed to survive.

Ominously, the last tombstone dated from 1933.

There were no more burials after that.

By then the Jews were being rounded up and herded into camps. They ceased to exist – let alone have the right to die with an epitaph.

Today, in Western Europe, the Jews are once more, a beleaguered people. Their schools, synagogues have to be protected. Their graveyards are being desecrated.

An unprecedented number of them are leaving for Israel. 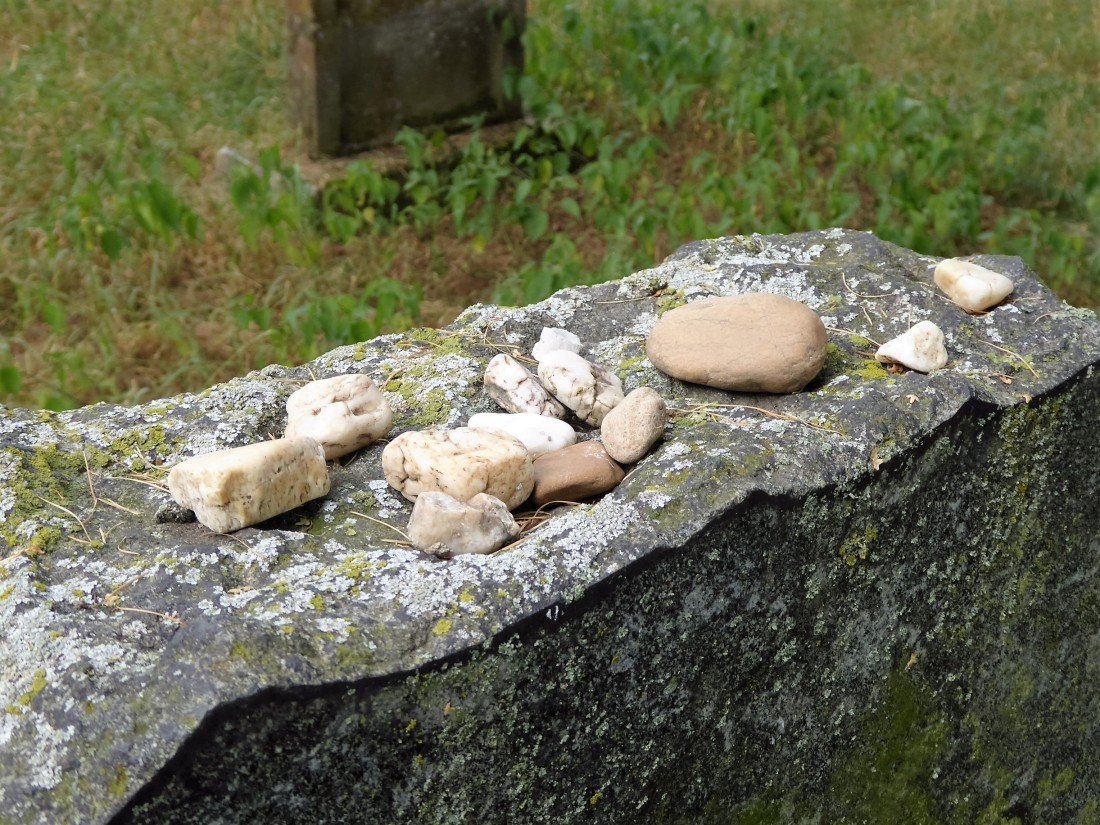 A Jewish custom is for a visitor to a family grave to leave a stone behind. This grave had clearly received some visitors over the years, quite possibly Holocaust survivors living in Israel.

A Dutch way- side bike map – the red numbers on the right are in Germany, the green ones on the Dutch side of the border. Venlo is in the north.

We ended our trip in the Dutch city of Venlo, where we got the train to Rotterdam.

The bike trail into Venlo was excellent – it ran along the top of a dyke, took us past outlying suburbs and then straight through the city centre to the station.

Arriving there, we were greeted by the sight of a mass of bikes parked outside.
It reminded me of something a Danish man had once said to us:

‘Bike riding is a part of Dutch culture. ‘ 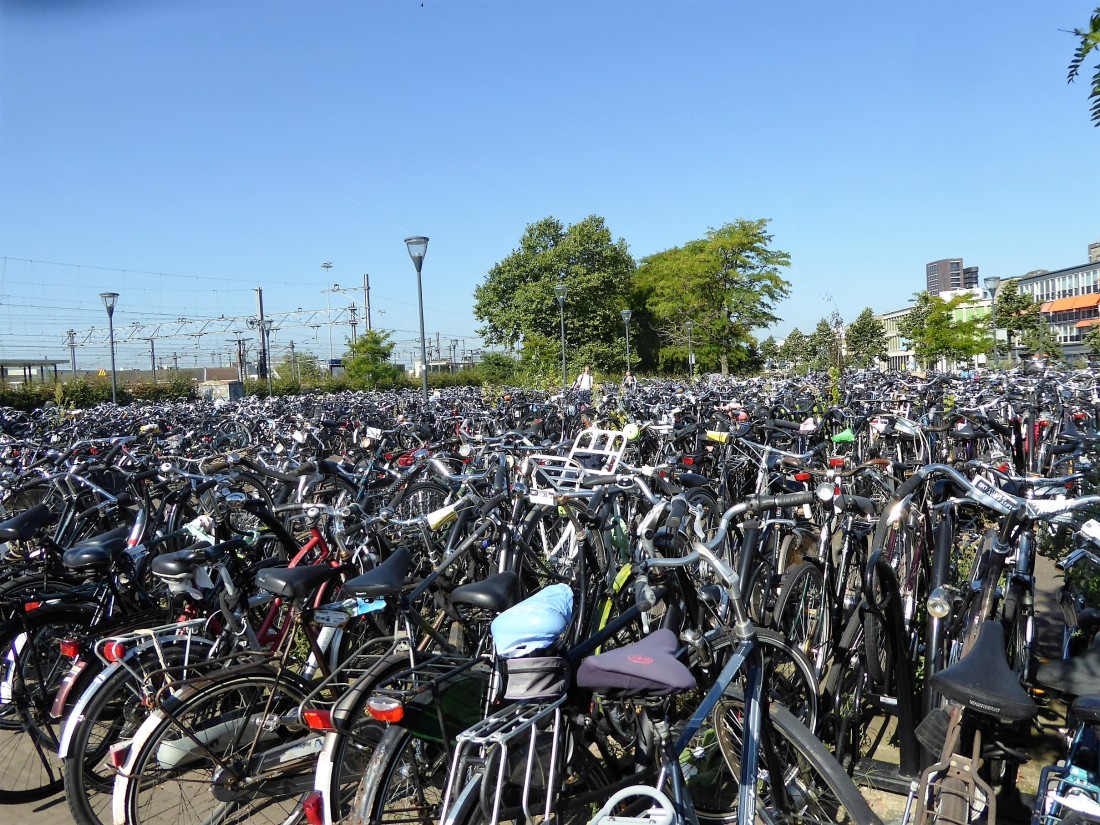 Yes, we were now well and truly on one side of the border.

We weren’t planning on staying there for long.

Next blog: ‘The Hidden History of Rijeka’ Parts 1 and 2 (Croatia):