I wasn’t the only visitor to Denmark to notice them.

During the month Anya and I rode our bikes around the country – up the west coast, to the top, and down the west coast – I met plenty of other travellers who also noticed them.

The point is: they were hard to miss. The flags, I mean.

In fact, I can say categorically that I have never been to any other country in the world where there were so many national flags waving from so many places – hanging and fluttering in many different sizes and shapes: from homes, offices, businesses, supermarkets, hotels, camping grounds, farms, shops…. 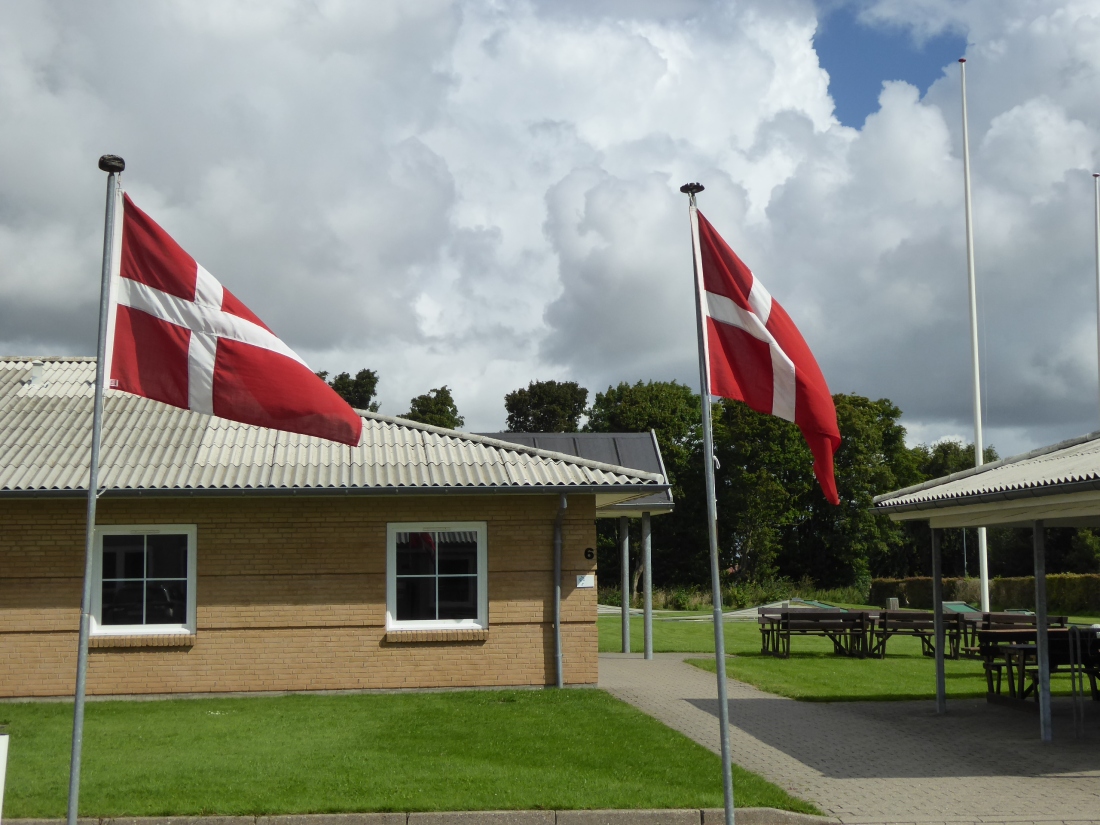 Sports centre and hostel where we stayed. 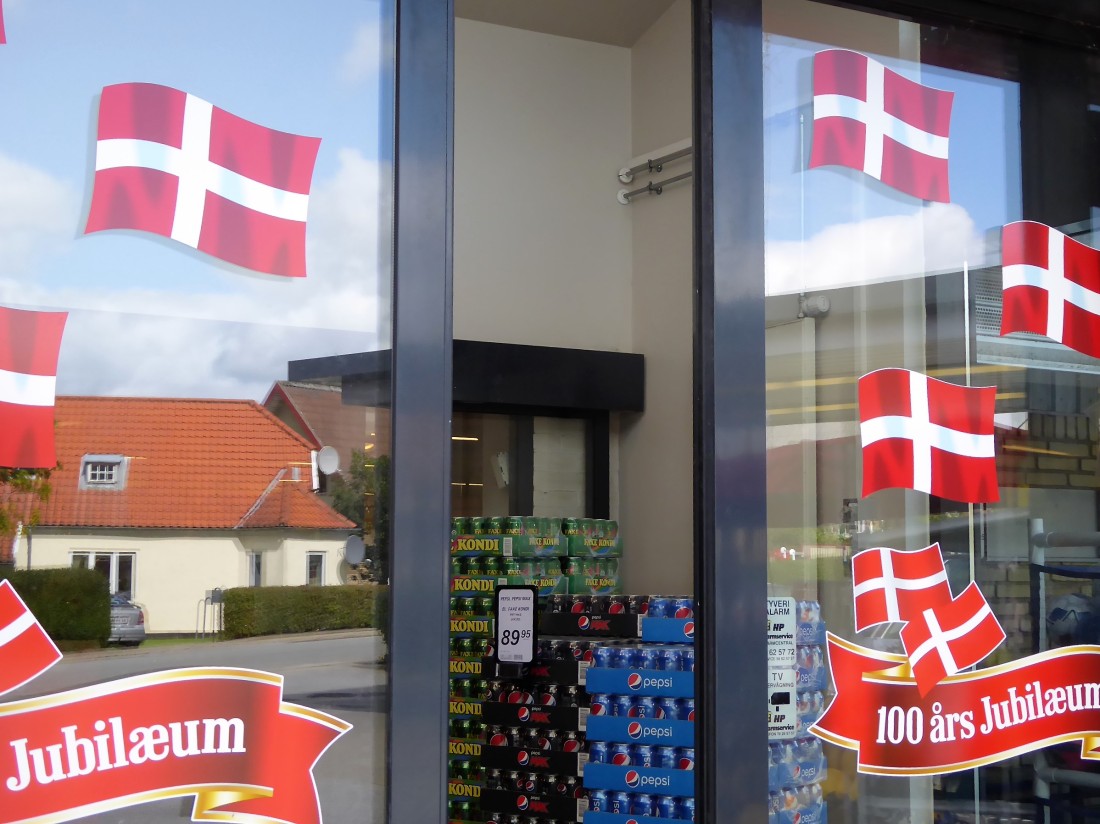 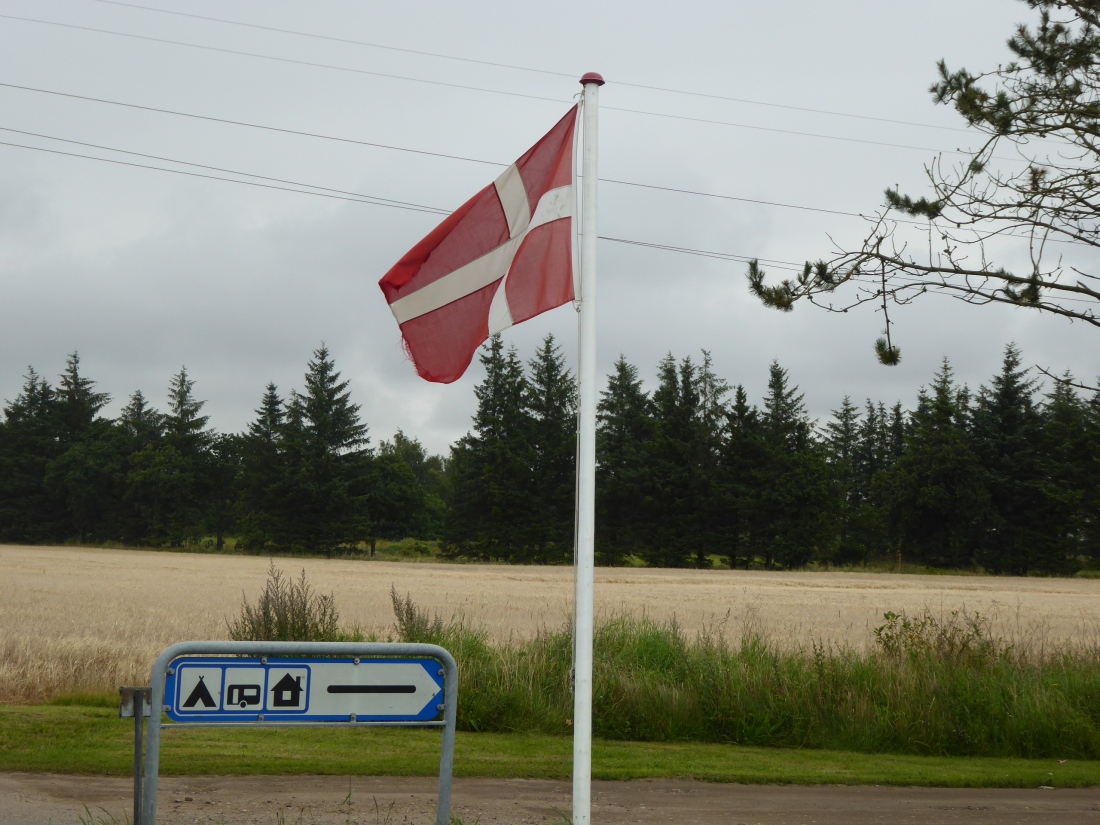 Speaking for myself, I’m not a flag waver.

I don’t like public displays of nationalism and rightly or wrongly, I automatically associate flag waving with closed minds and xenophobia.

Riding around Denmark, I thought a lot about all that flag waving – and the reasons for my ingrained aversion to it.

Living in The Netherlands certainly played a role here. If I thought of the area where I lived in Rotterdam, I could not summon up any clear memories of seeing a Dutch flag. There must have been some around somewhere but one thing was incontrovertible: they were nowhere near as commonplace as in Denmark.

The Dutch are simply not flag wavers. This has a lot to do with their history.
Until the post war era, The Netherlands was not a unified country. It was divided firstly by water and secondly by religion. It was, then, a ‘Netherlands’ – and not a ‘Netherland’: it was a gathering of communities which cooperated with one another to defeat the eternal enemy, the water, and promote prosperity.

So flag waving and nationalism never had the chance to ever really take root.

One flag I was used to seeing in Rotterdam was the Turkish flag.

The Turks obsession with flag waving began about 6 years ago, after the rise of the populist dictator Erdogan in Turkey.

Erdogan had systematically gaoled his opponents or anyone suspected of not supporting him – including not just politicians and journalists, but also public servants, police and the military. He had suspended all the normal processes of a democratic system and installed himself as the Great Leader of the Turkish people – and the Turks in Europe, most of them Erdogan supporters, lapped it up. In The Netherlands, Turks who had been born and educated in the country roundly declared on TV:

The Turks in Rotterdam draped their national flag – red, with a half-moon – from the balconies of their apartments so that some of the apartment blocks were literally festooned with Turkish flags. They held public demonstrations in support of Erdogan and hung their national flag from the Erasmus bridge.

Dutch Turks rallying around The Cause in Rotterdam….. 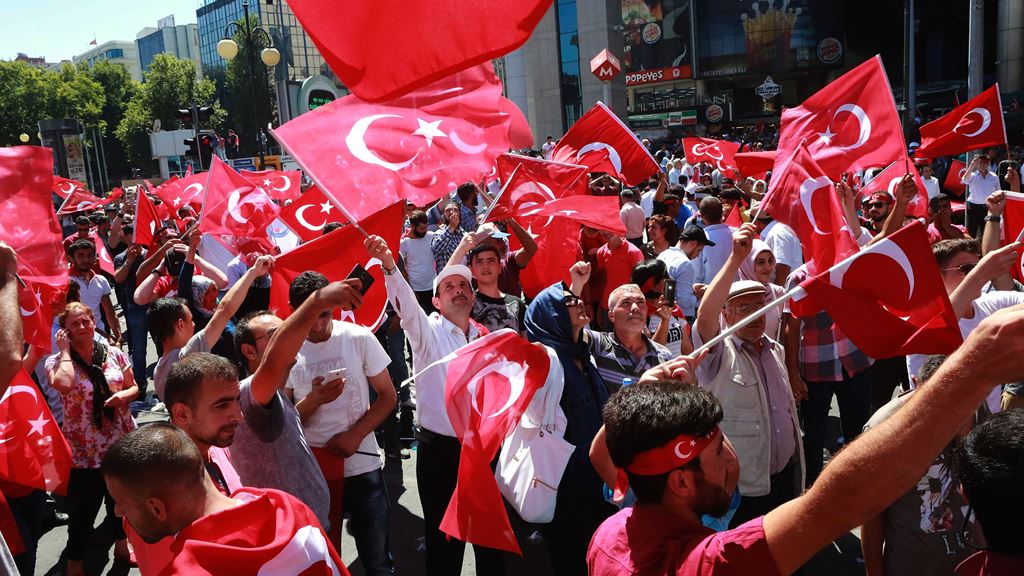 Same colours as the Danish flag but a very different meaning…… 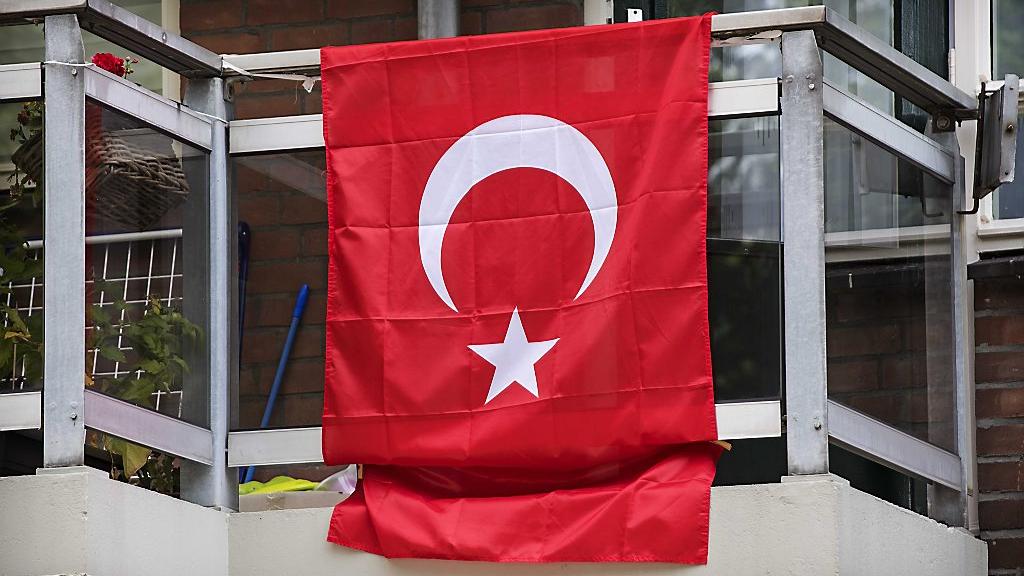 Everywhere in Denmark, the symbol of the flag:

Meditations on a bike, somewhere in Denmark:

If flag waving was a symptom of incipient fascism – then what about the Danes?

It was hard to imagine the Danes as being an ultra-nationalistic or xenophobic.

When I surfed around a bit on the net, I discovered that there more than a few articles about the Danes’ flag obsession.

A general opinion seemed to be that this chronic flag waving on their part was fairly innocent, in fact, a good part of the reason they scored high on a list of the world’s happiest nations. The Danes’ flag waving was an expression of their feeling good about themselves and their country.

To tell you the truth, I’m a bit sceptical about these ‘happiness’ surveys.

Still, all this to one side, the Danes – along with the Dutch, the Swedes, the Norwegians, the Fins and the Germans – were doing something right and that was an awful lot more than one could say for most other nations in the world – including Turkey.

What then, was the difference between Danish flag waving and the Turkish?

Well, there might be different reasons for taking pride in one’s nation.

The case of the Danes underlined the point that national pride might be progressive.

And why not take pride in a nation which unlike most nations in the world was a flourishing democracy and had a high standard of living? Which was tolerant and fair? Where there was no corruption? Where LGBT’s had all the rights of heterosexuals?

If waving the flag was an expression of the Danes feeling good about themselves, then where was the problem?

It seemed as if there was good flag waving and bad; good reasons to be proud of a country and bad ones.

Still, flag waving wasn’t for me.

For every case of there being a good reason to wave a flag, there were too many others which fell into the other category.

For every potential Danish flag waver – or Swedish or Australian, for that matter – there were many other flag wavers who fell into the Turkish category.

Those who had good reasons for feeling proud of their country were outnumbered – vastly outnumbered, actually – by the incipient fascists.

It’s a sad reality that the world is full of Turkeys.

And that the Denmark-like countries are in a very small minority.